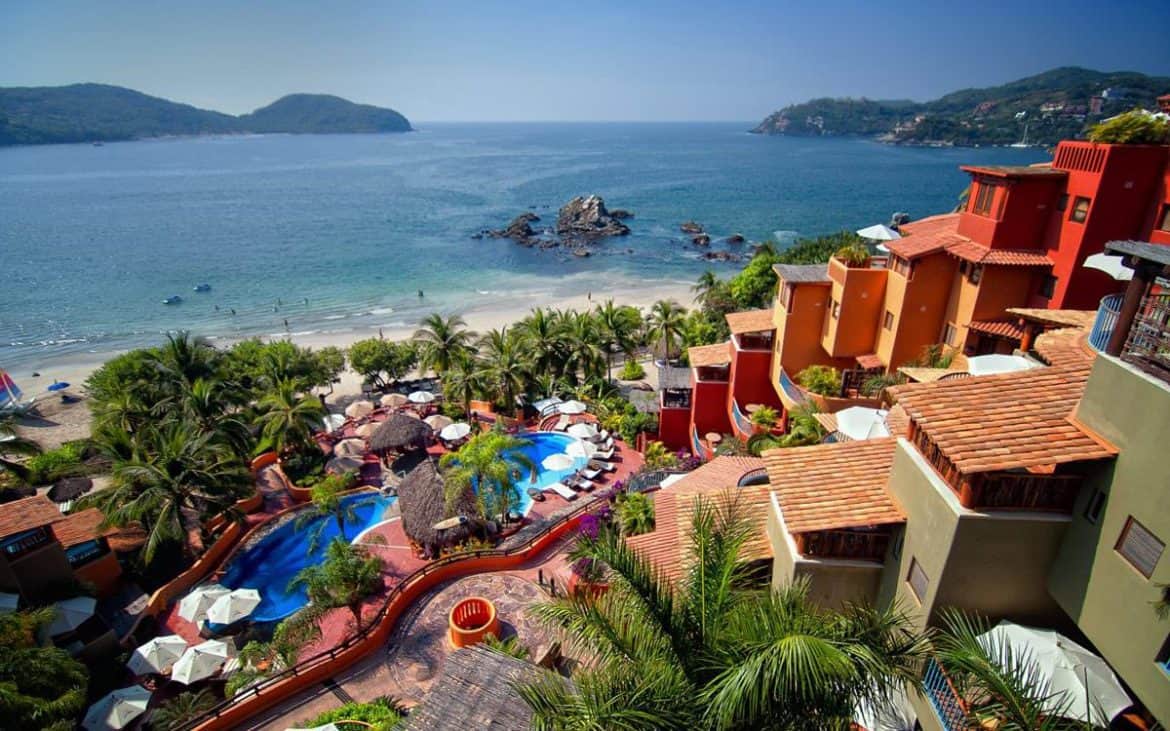 The Best Zihuatanejo Travel Guide – Zihuatanejo, or Zihua as it’s affectionately called, is a Pacific paradise of beautiful beaches, friendly people and an easygoing lifestyle. Until the 1970s it was a sleepy fishing village but with the construction of Ixtapa next door, Zihua’s tourism industry boomed practically overnight.

Parts of the city have become quite touristy, especially when cruise ships are in town, and luxury hotels are slowly replacing old family guesthouses. But for the most part, Zihua has retained its historic charm. The narrow cobblestone streets of downtown hide wonderful local restaurants, bars, boutiques and artisan studios. Fishers still meet every morning on the beach by Paseo del Pescador (Fishermen’s Passage) to sell their catch of the day. At night, young lovers and families stroll carefree along the romantic waterfront sidewalk. Zihua is the best of both worlds.  To learn more about all the beautiful beaches of the Mexican Riviera, visit here.  Now view our Zihuatanejo Vacations Travel Guide to help plan your next Mexican Riviera vacation!

Zihuatanejo Weather – When to Visit

Zihuatanejo has a tropical savannah climate, with dry summers and winters. The temperature over the course of the year varies from 67°F to 90°F. Rarely, the temperature goes below 62°F or over 92°F.  The warm season of Zihuatanejo is between June 30 and September 2, when the average daily high temperature is above 89°F.  Zihuatanejo can get crowded during the summer months since it is a popular destination among international and Mexican tourists. The weather can also get warm and humid in the summer. It is best to travel to the Guerrero coast between November and May to avoid crowds.

The gorgeous broad expanse of Playa La Ropa (Clothes Beach), named for a Spanish galleon that was wrecked and had its cargo of silks washed ashore. Bordered by palm trees and seafood restaurants, La Ropa is great for swimming, parasailing and waterskiing; you can also rent sailboards and sailboats. It’s a steep but enjoyable 1.5km walk from Playa Madera along Carretera Escénica, which follows the clifftops and offers fine views over the water. 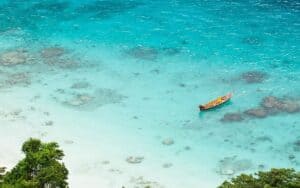 If you like snorkeling then Playa Las Gatas is ideal whether you’re a beginner or an old-hand; it has a reef that forms a haven from the waves, although surfers can sometimes be seen catching waves as they curl around the entrance to the bay. Las Gatas has over a dozen restaurants specializing in seafood, so no need to pack a lunch.

The waves are usually good for body surfing at Playa La Madera where you can wade out quite a distance before reaching the breaking waves. There is a waterfront walkway from the Playa Principal that passes several small picturesque coves, although you still may have to get your feet wet due to the surf splashing against the walkway.

La Playa Municipal is the beach in front of downtown Zihuatanejo. At one end there is El Muelle Municipal (the Municipal Pier) where you can catch a water-taxi to Playa Las Gatas or charter a fishing boat, and at the other end is El Museo Arqueológico de la Costa Grande where you can learn about local pre-Columbian history. 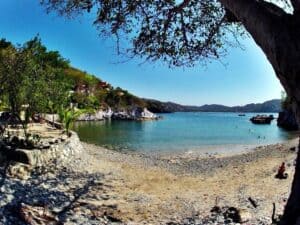 Playa Contramar is a beautiful place to snorkel but the beach is made up of surf-polished rocks and not sand. It’s recommended to go there by boat and take a lunch. There is no reliable restaurant there but the coral and rock formations underwater are well worth seeing.

With its landmark sail roof over candlelit tables and its fusion of Latin, European and Asian flavors, this beachside bistro is a romantic treat. Delicious fish flavors are the mainstay, with standout dorado sashimi and snapper or whatever is the fish of the day done in outstandingly inventive ways. The house wines are a cut above average too. Service is outstanding. Telephone:  755-554-2142  Web:  Bistro del Mar

This place near the mercado is renowned for its down-home Mexican cooking, casual atmosphere and excellent prices. There are always several comidas corridas to choose from, including a popular roast chicken plate; all come with rice, beans and handmade tortillas. Breakfasts are huge.  Telephone:  755-110-1608  Web:  Doña Licha

Staff here open oysters with a hammer, and dice and drown ceviche on the street side, where drunk boleros belly up to the sidewalk bar with the boys and sing about their unbridled, unrequited romance to one too many beers. And when the choir is breathless, the jukebox picks up the slack. It’s known as the Catedral de Mariscos (cathedral of seafood) for a reason.  Telephone:  755-121-3306  Web:  Marisqueria Yolanda

A romantic Italian restaurant with a fabulous bird’s-eye perspective on the bay, Il Mare is well regarded for its Mediterranean pasta and seafood specialties, including a fresh insalata di mare (marinated seafood salad) with squid, octopus and shrimp marinated in olive oil and lime. Pair yours with wine from Spain, Italy, France or Argentina. On Wednesday, it gets some Greek dishes going. Telephone:  755-554-9067  Web:  II Mare

On the sand at the main access to Playa La Ropa, this place serves everything from big juices to grilled octopus and snapper to shrimp sautéed in tequila to fish fajitas, along with an array of tasty soups, salads and omelettes. Enjoy the fare under thatched and linen umbrellas in the sand with rattan lanterns dangling from the palms. Service is neither swift nor effusive.  Telephone:  755-544-2213  Web:  Paty’s

There’s salsa, Cuban, or romantic music at Bandidos from Tuesday through .  It’s smack in the middle of downtown and almost as popular with locals as with travelers—both foreign and domestic. In the afternoon and early evening you can get drinks, snacks, and full meals at the bar and outdoor patio. The TV is usually tuned to sports, though the volume is turned way down. Telephone:  755-553-8072  Web:  Bandidos De Zihua

Capricho’s Grill has live music Thursday, Friday, and Saturday—usually world, Latin, flamenco, or jazz—and occasionally hosts special events, such as concerts during March’s Guitarfest. You can dine in a lovely courtyard with palm trees and hanging lanterns, or enjoy snacks, cocktails, and wine, and a front seat for the performances from the lounge. Telephone:  755-554-3019.

Though it’s hardly a secret—it’s one of the venues that hosts the Guitarfest in March— El Canto de la Sirena is something of a hidden gem, if only because of its unlikely location outside of town by the main bus station. This local favorite is owned by a local legend, guitarist José Luis Cobo López, who performs most evenings. There’s live music (and sometimes dancing) Tuesday through Saturday starting at 10 pm; jam sessions usually last until the wee hours.  Web:  El Canto de las Sirenas

The vibe at this hip, open-air mezcal bar right on the Paseo del Pescador is pure kitsch, complete with colorful vinyl-cord chairs and tables covered with lotería cards. It serves dozens of varieties of mezcal from five different Mexican states, along with inventive cocktails and tasty dishes ranging from burgers and tacos to duck carnitas. You’ll find occasional live music on Thursday, Friday, and Saturday evenings. It’s generally open from 4 pm to 2 am but closes early in the low season.  Telephone:  755-544-8566  Web:  Angustina Mezcal & Cantina