If you are a beach lover, then Corsica is the place for you to vacation. Located north of Sardinia, off the Western coast of Italy, this French territory is perfect for both divers and hikers. Travel to Corsica to enjoy sparkling waters full of sea life and an island with mountains, bays, beaches, valleys, tiny seaside villages, dense forests and hilltop chalets. This Mediterranean hideaway is the perfect escape from reality.

Corsica has a Mediterranean climate. Summers are hot. Winters are moderate, dry, and clear. Because of differences in altitude, Corsica’s climate varies from mountain to valley and coastlines. The North is hotter than the South; the East is wetter than the West. July and August are peak tourist times in Corsica. April, May, June, September, and October tend to be less crowded.

There are fine and coarse white and golden sand beaches, plus pebbly beaches made up of millions of sea-molded stones of every color; and because of the nature of the landscape many of Corsica’s beaches are hidden coves accessible only on foot or by boat – there’s certainly something magical about exploring the coastal paths and stumbling across a deserted cove washed by the warm deep blue of the Mediterranean.  These are truly great beach travel destinations!

The beaches in Corsica are also incredibly clean and whether you’re in one of the secluded bays or on one of the busier town beaches you will always find a very good standard of cleanliness – both in terms of the beach itself and in the quality of the water. And because of the island’s position in the Med it gets some great winds and provides ideal conditions for a wide variety of water sports. There’s good surf here, perfect spots for windsurfing, not to mention wake boarding, kitesurfing and fly surfing.  Here are the best beaches of Corsica:

Palombaggia Beach is widely regarded as one the best beaches in Europe. Backed by mountains and red rock, the long beach of white sand stretches for nearly 2km (1.2mi) at the foot of dunes shaded by umbrella-shaped pines. The dazzling powdery white sand contrasts with the glistening turquoise sea and the granite headlands that enclose the beach. The crystal-clear water deepens gradually, revealing some reef formations. Palombaggia Beach faces southeast to the Cerbicale archipelago, a cluster of tiny pristine and uninhabited islands.

Given its popularity, Palombaggia Beach inevitably gets very crowded during summer, overwhelmingly so at times. The northern end of Palombaggia is the narrowest and busiest part of the beach, as it is easier to park around there. Further south the beach widens and tends to be less busy, so it may be worth walking a bit further along the vast expanse of sand to get away from the masses. 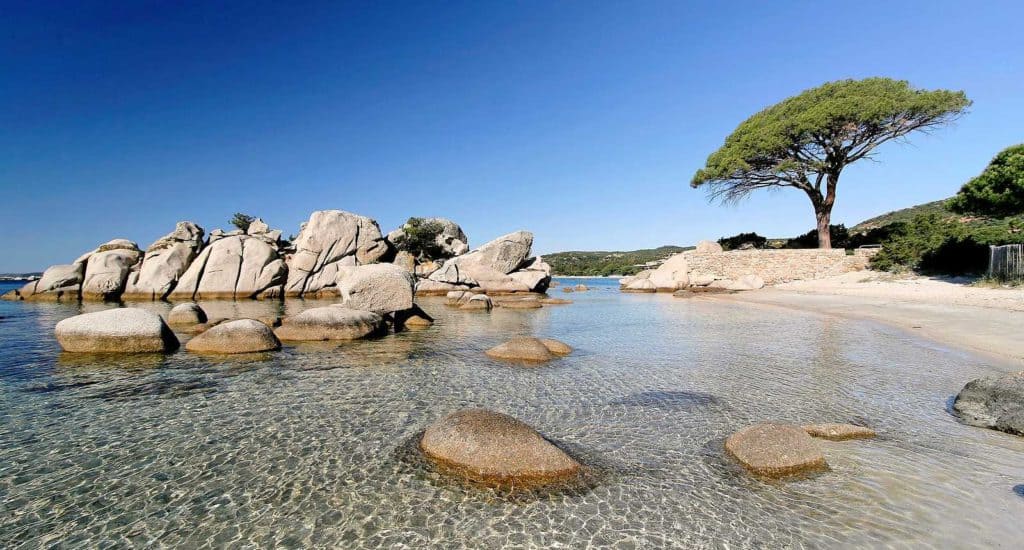 On the northwestern shore of Corsica lies one of the island’s wildest and most beautiful beaches. Ostriconi Beach is a haven of calm and beauty. Here fine white sand slips in clean turquoise waters in a particularly wild beach stetting. The beach is surrounded by sandy dunes and maquis (scrub), with the Ostriconi River, rocky hills and mountains in the backdrop. Some cows even visit the beach sometimes. Nestled between the mountains and the sea, Ostriconi Beach has always been popular with locals due to its isolation. A hidden local secret in the past, the beach got more popular with summer visitors and while it never gets overly crowded, the beach does get busy during summertime. Go there off-peak (May-June and September) and you may well have the beach for yourself.

Ostriconi Beach is situated where the Anse de Peraiola meets the Vallée de l’Ostriconi, at the edge of the Agriates’ Desert. A particularly wild and remote part of Corsica, the Agriates’ Desert is a nature enthusiasts’ favorite. The area boasts a diverse fauna, dramatic landscapes and stunning pristine beaches such as Saleccia Beach and Lotu Beach.

Roccapina is a beautiful, pristine inlet beach, with exceptionally turquoise clear waters and powder-soft white sand.  It is a popular beach despite its potholed access road, and is overlooked by the majestic “Lion de Roccapina” granite rock formation so named as it resembles a lion when viewed from the road above.  Roccapina is set in a protected nature reserve, backed by attractive dunes and green shrubbery.  There are rocky headlands either side of the beach, on which the dramatic lion-shaped rock and a Genoese watchtower preside. The granite rocks turn an atmospheric red color at sunset.  The beach is particularly wide and flat, making it ideal for games and as the water is shallow it is a very popular for small children. There are however no facilities at Roccapina beach, nor much shade, so it is important to be equipped with your own food supplies and sunshade. 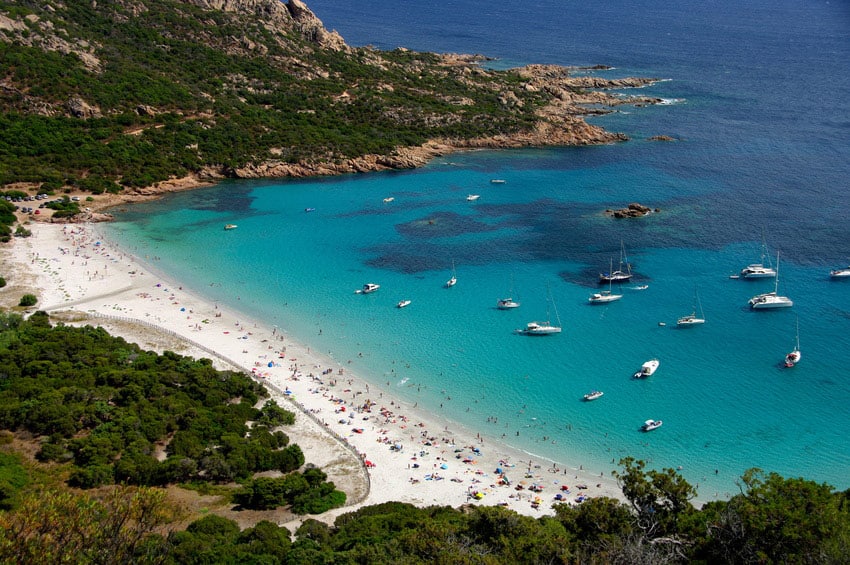 Bodri Beach is a stunning little bay where the crystal clear water is set against a mix of fine white sand and pebbles. Located in Balagne, the northwestern region of Corsica, the beach is set in a pristine environment, so expect wilderness. The beach features a incredibly well preserved natural backdrop: rocky cliffs and bush, eucalypti and pine-trees woodland, no building at sight and a high mountain chain stretching in the background. Much to our pleasure, those charms are a bit ‘out of the way’, preventing the beach from drawing the mass of visitors. More isolated than some other beaches in the area, Bodri Beach enjoys a relative serenity (not so in july and august). Go there off-peak and you will have the beach pretty much for yourself. The beach is accessible from a car park  only via a small footpath that meanders through the bush for a few hundred meters. 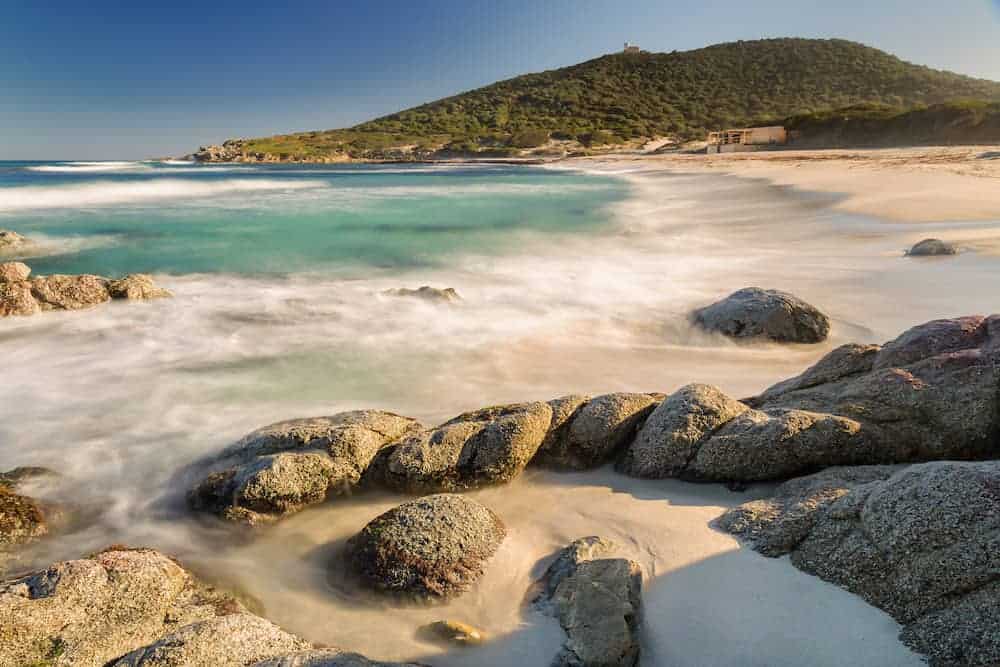 Santa Giulia Beach is one of the most popular beaches in southern Corsica and may well be the most famous beach of the whole island. The gulf of Santa Giulia boasts a stunning natural setting with all the facilities visitors may hope for. A vast array of accommodations, restaurants and activities are on offer at this beautiful Mediterranean beach.  Santa Giulia Beach is the kind of paradise you would rather expect in the Caribbean or the Pacific. The beach is a long and narrow expanse of extremely fine soft white sand. The sparkling turquoise sea is exceptionally calm and shallow, with some areas of reef scattered over the bay. The beach is lined by a pinewood and backed by mountains and maquis (scrub), adding to the exquisite setting of the gulf. The overall natural beauty of the beach is just breathtaking, even when jam-packed with tourists. 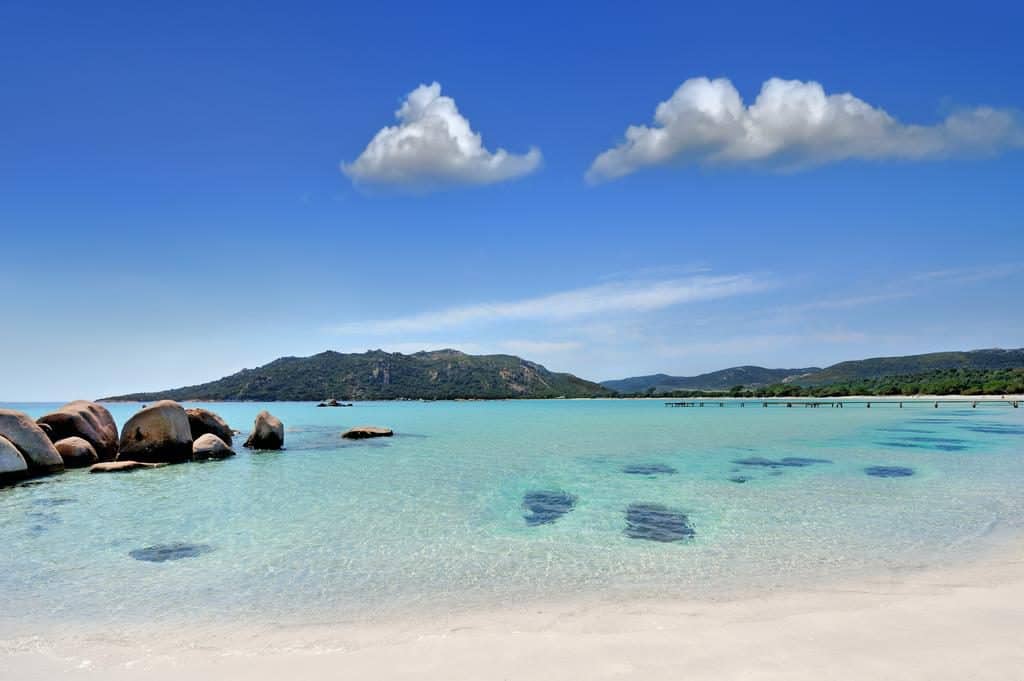 Lotu Beach, or plage du Lotu in French, is a postcard perfect beach situated on the shore of the Désert des Agriates, in the northwestern part of Corsica. Lotu Beach is a 400m-long stretch of fine white sand slipping into the calm, pristine turquoise water of the Mediterranean. The water is so clear here that it actually feels like taking a dip in a big swimming pool. A few boats come to anchor in the bay while visitors brought over by the ferries make their way to the beach, eager to spend a day in this hidden paradise. Combining seclusion and pristine beauty, Lotu Beach is ideal to rest and relax, either with friends, family, or in couple. Funny fact, wild cows from the surroundings coexist with visitors and seem to enjoy the beach as much as they do. 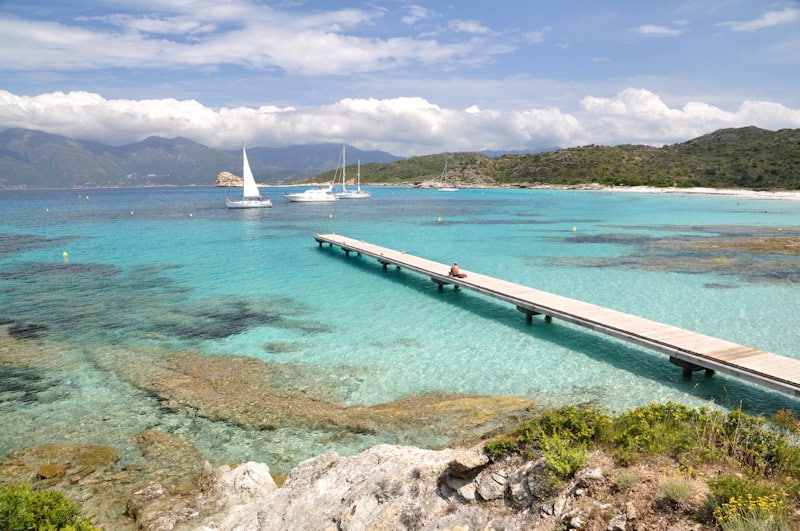 Saleccia Beach is one of the nicest beaches in Corsica and probably in all of France. Splendid and remote, the beach stretches over 1km (0.6mi) with fine white sand and clear turquoise water. Lined by dunes and pines, the beach boasts an amazingly pristine natural environment. Wherever you look around you, you’ll be delighted by the scenery. The beach is ideal for couples, but also families or groups of friends. Saleccia Beach is located in the northwest of Corsica, off the Agriates Desert. It is about 12km (7.5mi) west from Saint-Florent, a lovely touristic seaside town. Saleccia Beach is where has been shot the scene of landing of the movie “The longest day” about WWII, supposed to take place in… Normandy. 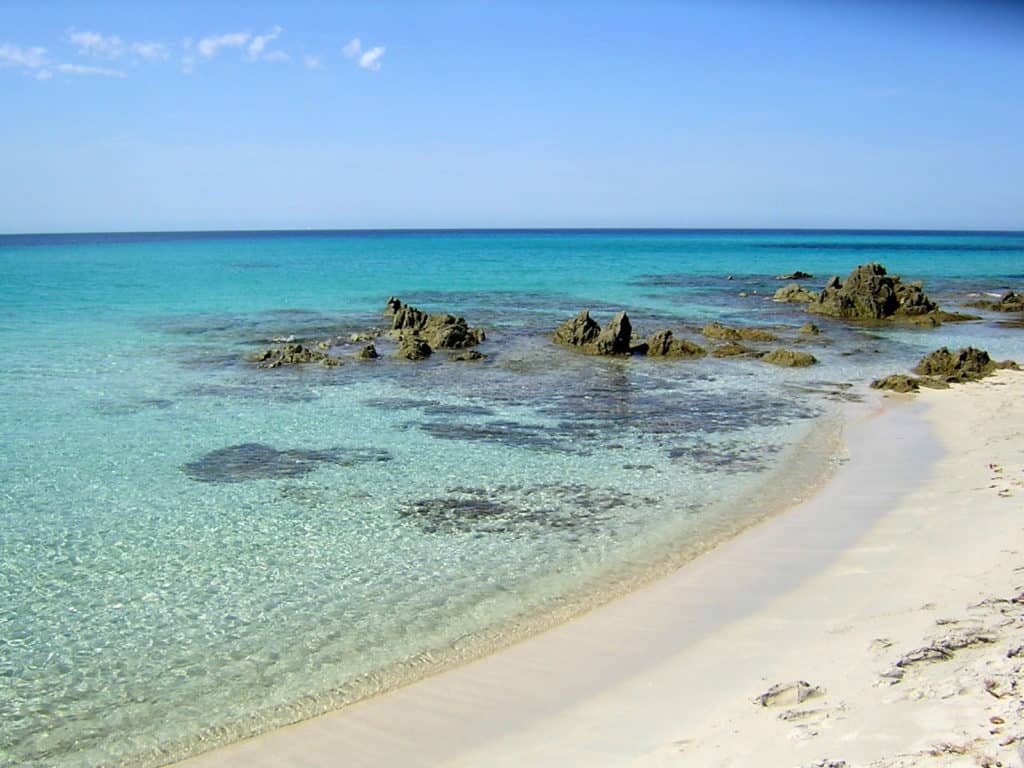