The Best of the Gambier Islands

The Best of the Gambier Islands, located more than 1600 km from the island of Tahiti, is part of the 5 Polynesian archipelagos. It is essentially composed of the island of Mangareva which is home to the capital, Rikitea, the main gateway to the archipelago. Other more or less uninhabited atolls are also attached to the archipelago. The latter was the birthplace of the arrival of Christianity in French Polynesia.Because of their location close to the Tropic of Capricorn, the islands abound with fruit trees, drawing a lush, green landscape thanks to the tropical climate tempered by the ocean’s trade winds.   The Gambiers is the region where pearl farming first developed, and Gambier pearls are renowned and valued the world over. Mangareva, the largest island of the region, is home to most of the population and the center of the region’s pearl industry.

The geology here is unique: one reef, complete with sandy motu, encircles a small archipelago of lush high islands dotting an exquisitely blue lagoon that’s as clear as air. Adding to the allure are some of the eeriest and most interesting post-European structures in the country, a legacy of the Gambier’s history as the cradle of Polynesian Catholicism. Today the archipelago is known for producing some of the finest and most colorful pearls in Polynesia.  To learn more about the best beaches in the Gamier Islands and French Polynesia, click here, or visit us on Pinterest.

Top Things Not to Miss in the Gambier Islands 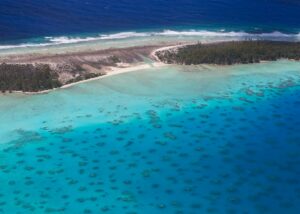 The lagoon surrounding all Gambier Island but one (Temoe Atoll) is one of the largest in French Polynesia. It is partially submerged in certain sections making navigation in and out a task for the pros. As you cruise the lagoon, the archipelagoes heavily eroded and submerged islands are clearly visible and it isn’t unusual to spot typical Polynesian birds riding the thermals. 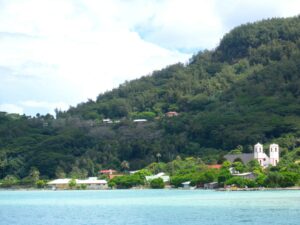 Mangareva is the largest island in the archipelago and home to most of the population. Its main village is Rikitea which is also the administrative capital of the Gambier Islands. Like many islands in Polynesia, legend has it that Mangareva was pulled out of the ocean by the demigod Maui. 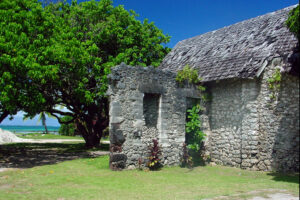 There isn’t much happening in the village itself but, for the locals, it’s as central as it gets. The main road is lined with century-old oak trees known locally as Koueriki, rows of tree-baring fruit and colorful flowers. There’s a medical center, police station, community hall and a small number of kiosks. By the pier, there is a very small beach and a restaurant which is not open most of the time.

The prettiest site in the main village is the St. Anne Chapel. It measures just 7X7 meters and was built in 1847. Apparently, there is also a Laval-era prison with just two cells somewhere around the village but I could not manage to find it. 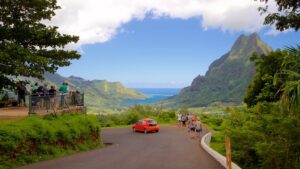 Before reaching the St Michael’s Cathedral on the outskirts of Rikitea, a road cuts to the other side of the island. After one of the bends, you’ll see signs pointing right to Belvedere de Piiti. Climb the boulders and enjoy awesome views of the village and beyond. Around this section of the cross-island road, lie the remains of an ancient temple known as Rauriki marae but I could not locate it. 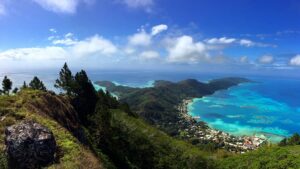 Originally named Manha Reva (moving mountain), Mount Duff is the highest peak in the Gambier Islands at 441 meters. It is named after the ship which carried the first Christian missionaries who ‘rediscovered’ the island in 1797. The peak is also referred to these days as Mont Auorotini and reached via a well-marked trailhead.

It takes about 1.5 hours to reach the summit of Mount Duff and about 45 minutes to get back down. After periods of rain, the last section is extremely slippery. If it is a cloudy day, it is not worth climbing as you will not see anything from the top (you’re better off just visiting the belvedere). Be sure to bring plenty of water and snacks because, by the time you make it back down, shops might be closed for the day. 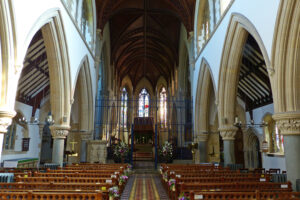 This is by far the main attraction in the entire Gambier Island group. Neighbored by a giant breadfruit tree, this is the crown achievement of Laval’s megalomanic construction frenzy. Measuring 48 meters in length by 18 meters in width and 21 meters in height, it is the largest church in the South Pacific! It can seat up to 1,200 worshipers and measures three times the size of the Notre Dame Cathedral in Papeete. 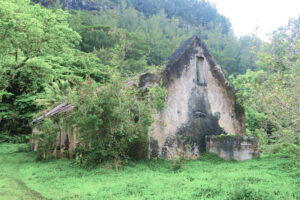 After St. Michael’s Cathedral, the Rouru Convent is another site you cannot miss. Created in 1836 by Father Cyprien “for the promotion of women in the Gambier Islands”, the compound housed 60 nuns and 150 girls at its height. A huge stone arch marks the official entrance to the convent, where girls were free to enter but not to leave. This was especially true when outsiders visited the archipelago and the convent was used to shelter the female population from the troubles brought by whalers. 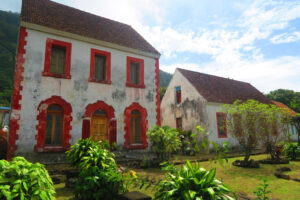 Now located in the middle of the playground of Rikitea’s primary school, the palace was built for King Maputeoa in 1850. You can explore the grounds by asking permission from the principal if the school is in session. On the grounds, you’ll find the royal fish pond which once housed fish and sea turtles, a grand arch that welcomed visitors, and a number of watchtowers used to protect the palace (from who?) and to communicate with other towers on neighboring islands. It is said that Polynesians rarely spent time inside the stone buildings which are uncomfortable in the humid island weather. The picturesque local cemetery is also the home of King Maputeoa’s tomb and mausoleum. Baptized on Aug 25, 1836, at the age of 22 years, Maputeoa took on the name Gregorio Stanislas in honor of Pope Gregory XVI. He died in 1857 and buried in St. Pierre Chapel which was constructed in 1850. 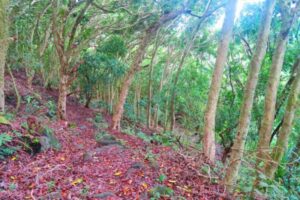 Path of the 12 Apostles

About 500 meters past the edge of the Rouru Convent, a sign on the left points in the general direction of the lagoon via the Path of the 12 Apostles (Chemin des 12 Apotres). This is one of the cobblestone paths commissioned by Laval, bending 12 times through a beautiful forest down to the beach. It’s only worth heading down if it’s low tide since there is not much beach left when the tide is high. From the cathedral, the paved road rises to the village of Atituti. It takes about 20 minutes to hike and, en route, you’re treated to beautiful views of the village and the cathedral. Along the way are a number of local homes and loads of fruit trees. It can be a difficult climb for some so feel free to hitch a ride. Be sure to have enough water and sun protection. Just off the main pier and close to the path leading to the Robert Wan pearl far, this is considered one of the most beautiful beaches in French Polynesia. Surprisingly, the snorkeling here was quite rewarding but you’ll need to swim about 200 meters away from the beach. You’ll find a few huge patches of coral just before the reef drops and, if you’re lucky, even large stingrays. 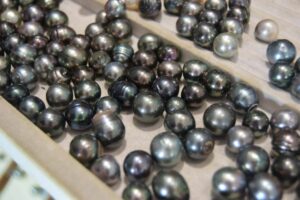 Considered to be the ‘father’ of the black pearl industry in French Polynesia, Robert Wan operates a number of working pearl farms on the islands, one of which is right here. You can tour the center where the sorting and grafting take place and learn first hand about the delicate process that eventually might lead to the development of a commercial black pearl. 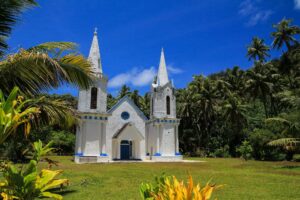 The Church of Our Lady of Peace is another beautiful structure. Built in 1844, two towers were later added in 1862 though they are not fully symmetrical (by intention as Laval claimed). On the left of the church’s altar, there is a metal statue of the Virgin adorned by a black pearl necklace. As part of a July pilgrimage, this statue is taken to Saint Michael’s Cathedral in Rikitea and brought back to Akamaru a few weeks later. 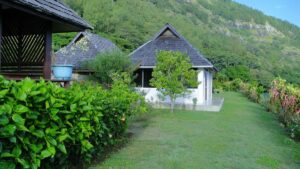 Located on the mountainside at the base of Mt. Duff, this pension has panoramic views of Aukena Bay and is about a half mile from the dock. The three rooms are located in a two-story house and share a communal bathroom with hot water and have access to a lounge room with TV and telephone. All meals are available and are taken around a communal table. Tours of Mangareva, as well as the three other main islands can be arranged together with fishing and motu picnics. If your stay is less than three nights, full board is compulsory. Half board costs 18,040 CFP and full board is 24,400 CFP per person.  Chez Bianca & Benoit Information Here.

Set among tropical plants and trees on a white-sand beach on Gatavake Bay, this laid-back complex of cottages is a 15-minute walk from Mount Duff and 3 km from St. Michael’s Cathedral.  The 4 casual cottages have garden or bay views and feature terraces and ensuite bathrooms.  Loaner bikes and kayaks are complimentary. Other amenities include a bayside restaurant and billiards, plus fishing and snorkeling gear. Tours and airport transfers are available, and minimum stay rules apply.  Pension Maro’i Information Here.