Over one thousand miles southeast of Tahiti are the Gambier Islands.  Because of their location close to the Tropic of Capricorn, the islands abound with fruit trees, drawing a lush, green landscape thanks to the tropical climate tempered by the ocean’s trade winds.   The Gambiers is the region where pearl farming first developed, and Gambier pearls are renowned and valued the world over. Mangareva, the largest island of the region, is home to most of the population and the center of the region’s pearl industry. 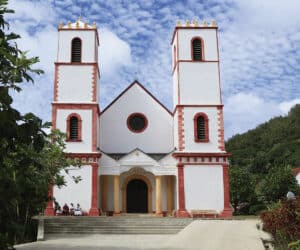 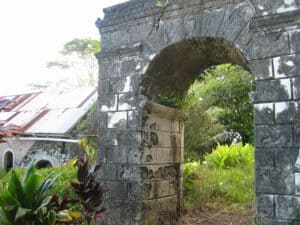 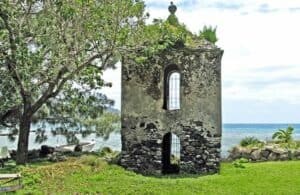 At Mangareva’s main village visitors will find a number of ruins. Among these archeological relics are a convent, a triumphal arch, several watchtowers, a prison and a court. These abandoned remains have been noted for their dark, eerie feel.  There is no web presence for the Rikitea Ruins. 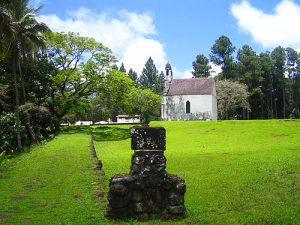 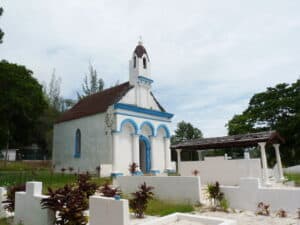 This cemetery is one of the many remains that bore witness to Mangareva’s rich historical past.  Here you will find the memorial to King Maputeao, the Rouru Convent, which previously had several watchtowers and 60 nuns. 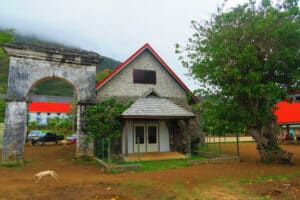 Chez Bianca & Benoit offers impeccable service and all the essential amenities to invigorate travelers. To name a few of the hotel’s facilities, there are express check-in/check-out, luggage storage, car park, car hire, restaurant.  Hotel accommodations have been carefully appointed to the highest degree of comfort and convenience. In some of the rooms, guests can find non smoking rooms, balcony/terrace, blackout curtains, fan, television. The hotel offers an excellent variety of recreational facilities, including diving, fishing, garden, water sports (non-motorized).

With garden views, Kura inn Mangareva is located in Mangareva and has free WiFi. Each room is equipped with a terrace, a kitchen with a microwave, a dining area and a seating area with a flat-screen TV, while the private bathroom includes a shower and free toiletries. There’s also a fridge, oven and an electric tea pot.