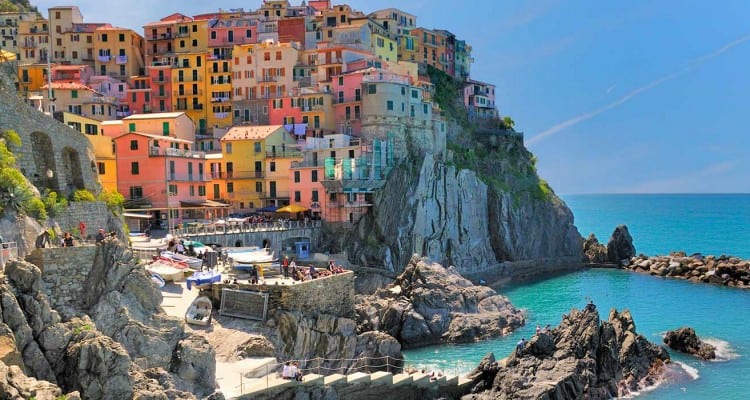 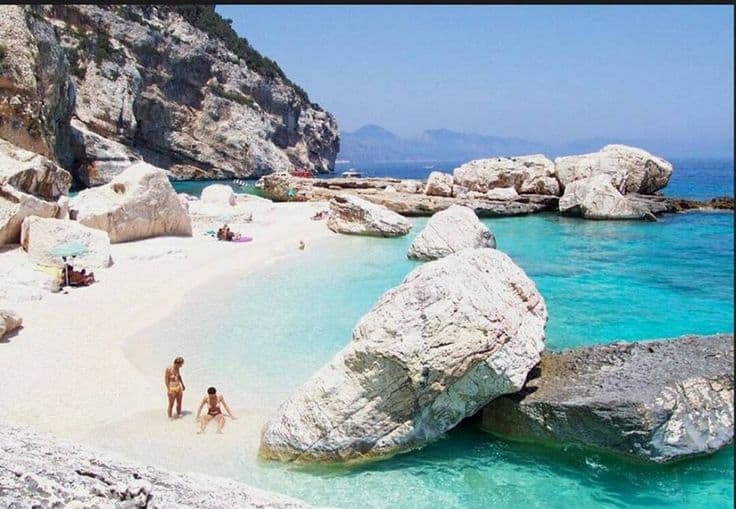 Come find the best beaches of Italy.  Surrounded by water on all sides, Italy has a unique coastline with nooks and crannies that create quiet swimming coves and picturesque seascapes. Italy’s beaches are most crowded during July and August when Italians join throngs of foreign tourists to escape the heat. Whether you’re searching for an upscale resort or a secluded seaside village, there’s a lounge chair on the sea just waiting for you. Italy has so many great seaside resorts and beaches that it is hard to know where to begin when planning a summer holiday.  Italians love the sea, and flock to it each summer, so there is no such thing as an undiscovered Italian beach. But some are much quieter, smaller and more charming than others. If you possibly can, avoiding late July and August will make your holiday much cheaper and less crowded. June and early September are great months for the seaside in Italy, and May can also be nice, though the weather is less hot and beach establishments will only just be setting up for the summer.  Here are the best beaches of Italy:

La Pelosa beach with its shallow turquoise waters and salty white sands, is a true Sardinian oasis and arguably one of the best beaches of Europe. One of the westernmost beaches of Sardinia, La Pelosa is just 2 kilometers away from the harbour village of Stintino, in Capo Falcone, in the province of Sassari. The beach is 300 meters long – and up to 60 meters wide in some spots – and faces north-east, offering marvelous views of Isola Piana situated 600 meters off the coast and the larger Isola Asinara behind it.

La Pelosa beach is accompanied by an ancient sixteenth century watchtower, the Torre della Pelosa, that used to be part of Sardinia’s marine defense system. Since this is a popular diving area, there are two diving centers in the vicinity: the Asinara Diving Center, and the Roccaruja Diving Center. Both offer diving excursions in the Capo Falcone area. Surfboards and canoes are for rent at the Stintino Windsurfing Center nearby. The beach can get crowded during peak season in July and August, but if you find yourself in the area of Sassari or Porto Torres, La Pelosa beach is definitely worth a visit. For many Europeans, La Pelosa is a marvelous opportunity to experience the Caribbean at a fraction of the cost.  Best time to go: May – September 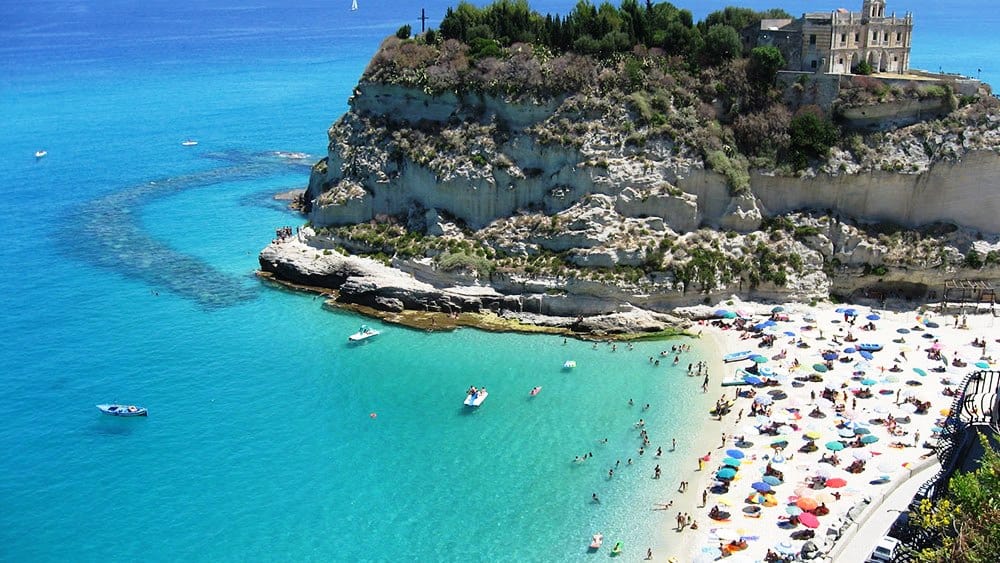 Tropea is a seaside resort with impressive scenery in the region of Calabria, in the south of Italy. This stretch of coastline on the Tyrrhenian Sea is called the Costa degli Dei, the ‘Coast of the Gods’, and it is hugely admired by those in the know as one of Italy’s finest summer holiday destinations. The coastline curves outwards in a large hilly bulge, boasting dramatic cliffs, sunny beaches, and a string of little resorts and campsites. Tropea is the busiest and most attractive of these seaside towns; with a historic center perched on cliffs above the sea.  Tropea has an amazing beach!  Best time to go: May – September

Some feel this to be the most beautiful beach in the world, and indeed the “Spiaggia dei Conigli” is an outstanding example of how to blend tourism with environmental protection. Situated facing the islet of the same name, the beach offers fine white sands and crystal-clear water. Spiaggia dei Conigli has the most transparent water worth experiencing.  Best time to go: May – September

Cala Rossa is the a popular summer resort located in the charming island of Favignana.  Favignana also called la Farfalla (the butterfly) thanks to its shape, is the largest of the Egadi Islands and became a popular touristic destination due to the bay of Cala Rossa. Its name stems from a famous battle where many Phoenicians died, it would always then be known as the “Red Cove”. This beach has no easy access but rocks lay on the bay creating a suggestive coastline.  Dominated by Monte Caterina, this island offers excellent swimming and scuba-diving opportunities, especially near Grotta dei Sospiri, Grotta Azzurra and Grotta degli Innamorati.

The last beach of the gulf, Cala Goloritzè rivals the best. At the southern end, limestone figures soar away from the cliff side. Among them is jaw-dropping Monte Caroddi or the Aguglia , a 148m-high needle of rock beloved of climbers. Follow the signs from the Cooperativa Goloritzè at the Golgo plateau and it’s a gentle 4.5km or about an hour’s walk down (and a slightly tougher 1½ hours back) to Cala Goloritzè.

Suitable for families, the easygoing hike along an old mule trail takes you through a beautiful limestone canyon shaded by juniper and holm oaks, passing cliffs honeycombed with caves, dramatic rock arches, overhangs and pinnacles on the route.  After you’ve been walking for around 15 minutes you’ll get your first tantalizing glimpses of the bay and a sea so blue it will make you gasp. Keep an eye out for a traditional sheepfold and the idiosyncratic spike of the Aguglia as you approach the bay. Steps lead down to the half-moon of bone-white pebbles; this is a perfect picnic spot. Bring along your bathers for a dip in the deliciously warm, astonishingly blue waters.  Best time to go: May – September 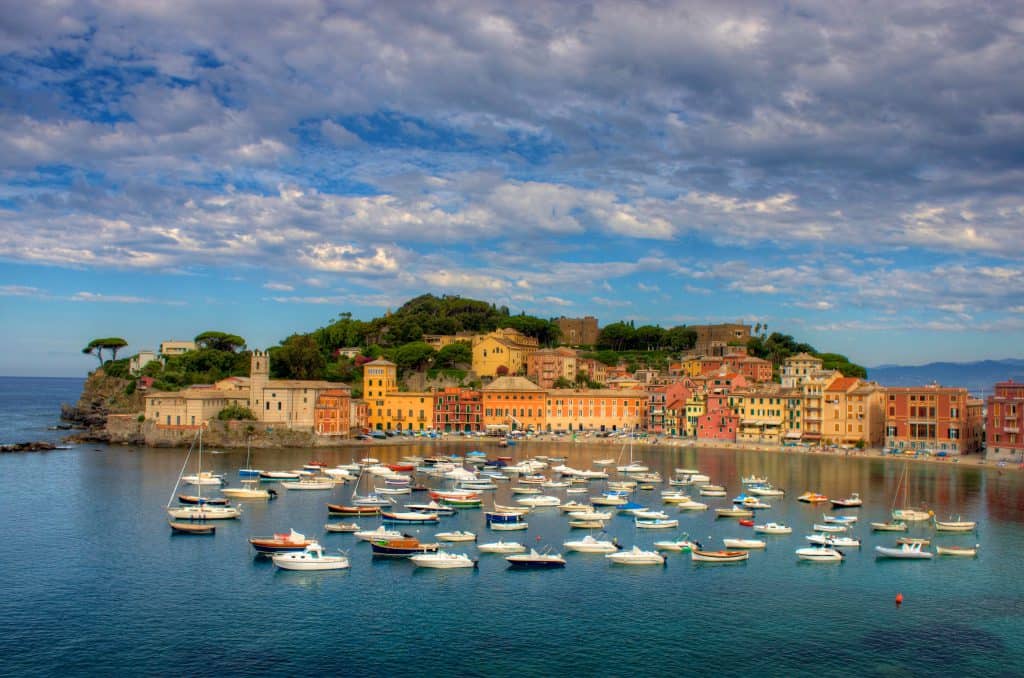 The lush green vegetation, the blue sea, the golden sandy beaches and the harmony of the multicolored seaside houses that come as far as the beach is what people love about the Bay of Silence in Sestri Levante.  Getting a gelato, a piece of focaccia or stopping in one of the little restaurant, scattered among the alleys of this small town, to eat a pizza is just the best way to end the day.  Sestri Levante is unique, it is on a peninsula on the “Golfo of Tigullio”. This peninsula has on one side the beautiful and romantic “Baia del Silenzio” (Bay of Silence) and “Baia delle Favole”(Bay of Fairy Tales) on the other.  Best time to go: June – September

A forest near the sea gives the nature enthusiast a contrast in environments to explore at Spiaggia Porto Selvaggio. Pine and lemon trees grow in the warm, dry air among the juniper, mastic, myrtle, and gorse plants that give off the recognizable scents of the Mediterranean. The High Tower that was once used as a lookout is now home to the Museum of Marine Biology, which focuses on life in the Ionian Sea. The land also intrigues archaeologists, who study prehistoric settlements near Uluzzo Bay. Nearby, the 17th-century Uluzzo Tower is still partially intact. When you’re ready to enjoy the water and sun, the beach’s chairs and umbrellas are up for grabs.  Best time to go: May – September

Located 3 kilometers south of Cala Brandinchi, La Cinta Beach (Spiaggia de La Cinta) near San Teodoro, is one of the longest beaches (3.2 kilometers) in north-east Sardinia and one of the most popular and best beaches of San Teodoro. Facing east, it offers stunning views of the Capo Coda Cavallo promontory to the north and Isola Tavolara rising behind it. It’s a perfect beach for people of all ages and families with children as its waters remain shallow for the first few hundred meters. La Cinta beach has clean blue waters and brilliantly white sand. Beach chairs are available to rent as well as paddle boats, and on windy days La Cinta beach is a great spot for windsurfing and kitesurfing. Kite lessons for both beginners and advanced, as well as sup lessons, can be arranged at the nearby Hard Core Surf Shop & Kite School. Marked by white sand dunes and juniper trees, a narrow strip of land separates the beach from Stagno San Teodoro lagoon where pink flamingos, herons and kingfishers occupy its waters. Given its sheer length, La Cinta beach is also ideal for long walks or jogging, preferably early in the morning. Plan your visit well, as this beach can get crowded mostly in August and September.  Best time to go: May – September